The Honor 10X Lite smartphone is a new model in the mid-price segment. The device comes in three colors, comes with 128GB of storage and 4GB of RAM.

The packaging of the smartphone is protected from opening by two stickers. 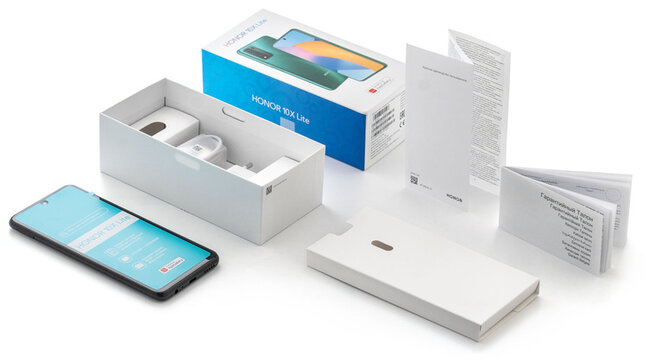 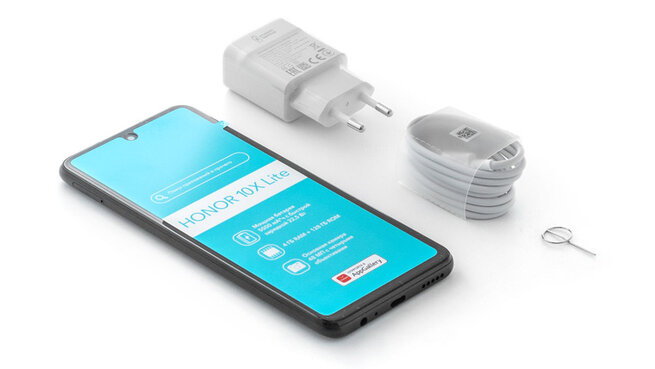 The device lies well in the hand. The weight of the smartphone is 206 grams.

The end faces are slightly rounded, so the position of the body is easy to control with your fingers.

A USB-C connector is provided for charging and connecting a smartphone, there is also a mini-jack for headphones or a headset.

The selfie camera is embedded in the screen in the center of the top edge, which looks good. Another modern solution is to position the fingerprint scanner on the end face and combine it with the power button.

There is only one device modification – 4 GB of RAM and 128 GB of data storage. You can expand the on-board memory using a microSD card, but the ability to install applications on it is not provided, which is generally not a problem, since the on-board 128 GB is enough for the system and applications.

The device is equipped with an NFC module.

The smartphone runs on the Magic UI 3.1 shell based on Android 10. It is important to note that the smartphone is not equipped with Google services.Apps are delivered through Huawei AppGallery and Petal Search.

The smartphone is equipped with a large display with a diagonal of 6.67 inches, which is covered with a factory protective film with a thickness of 0.2 mm.

There are no blackouts at the edges of the screen, there is a margin of brightness. The sensor supports up to 10 simultaneous clicks.🤩🤩🤩🤩🤩

To reduce power consumption, it is possible to lower the screen resolution from FullHD + to HD +. This function works both in manual and automatic modes.

In addition to the night mode and dark theme, there is also an e-book mode, in which colors are converted to grayscale. The camera embedded in the screen can be masked.

The smartphone is equipped with four rear and one front cameras:

As the ISO increases, the amount of noise increases, and the detail also decreases. The testing methodology consists in shooting one scene at different ISO values ​​and comparing the resulting photos.

In auto shooting mode, ISO can be increased up to 4000 units. In manual mode, the range is from ISO 50 to 3200. There is no access to RAW files either in the original camera application or in third-party programs.

The contrast and color saturation are well matched by the camera. There is a slight mistake on the white balance, but the automatic has nothing to do with it, since the parameter is set manually so that the white balance is identical in all frames.🤩🤩🤩🤩

There are no manual settings for the front camera.The maximum ISO value is 2000. To obtain frames with different values ​​of photosensitivity, the power of the light source was reduced, but the entire range could not be covered.

The camera has adjusted the white balance correctly, so the skin is natural. In terms of detail, frames from the front camera at different ISO differ slightly, but they are inferior to the main camera.

The main camera shoots in three resolutions, which differ in aspect ratio. The 4: 3 base frame has a resolution of 12 megapixels, the rest of the options (7.2 and 9 megapixels) are obtained after it is cropped. They do not differ in quality.🤩🤩🤩🤩🤩

The wide-angle camera is slightly inferior in detail and dynamic range to the main camera.

Aperture mode allows you to blur the background of objects up to 2 meters away by controlling the depth of field from F0.95 to F16. The desired aperture and focus point can be set after shooting (when editing).It is possible to add effects.

The Light mode superimposes light sources on the image for interesting work.

The Super Macro mode works with a macro camera.The optimal distance to the subject is about 4 cm. The resolution of the images is small – 2 megapixels.The ISO limit is 640. It is not superfluous to use flash backlight.

The “Night” mode by overlaying exposures expands the dynamic range of the image. The amount of detail increases both in the shadows and in the highlights of the frame.

The basic resolution of the main camera is 12 megapixels, but it is possible to make frames with a resolution of 48 megapixels through the subsections High-Res and “Profi”.

All in all, we can say that 48 megapixels really add detail. Even at ISO 400, at which there is already a loss of sharpness, there are differences from 12 MP.

Shooting in 48MP resolution is reasonable to do at minimum ISO values.

Videos can be shot with the main, wide-angle and front cameras.

The exposure and focus point can be corrected as well as locked. In the options it is possible to turn on the horizontal level.

Example 1. Sunset. The main camera shoots FullHD video at 30 or 60 frames per second. The exposure is good. There are no dips in the shadows and light areas.

When comparing the video, it can be noted that at 60 frames per second, there are no clear outlines of objects. Probably, with this shooting mode, minimal software processing of the original video data is performed.